#NWConnect: What is Conflict Art?

Oxford artist Diana Forster’s Such a Long Journey will be exhibited at The North Wall from 24 February – 6 March 2021. This article places the artist’s work in the context of conflict art throughout history.

War art or military art has existed for centuries, taken up by war artists or commissioned by governments as propaganda. Conflict art emerged as an art form produced by artists who respond to the consequences of war. Contemporary artists such as Diana Forster and Willie Birch work creatively in this genre to gradually introduce difficult histories to their audiences. Art and war have a longstanding relationship spanning over decades of art history. We still celebrate Eugène Delacroix’s (1798-1863) Liberty Leading the People (1830) as a glorification of the French rebellion to overthrow King Charles X (1757-1836). In creating his painting, Delacroix wrote to his brother “although I may not have fought for my country, at least I shall have painted for her.”[1] 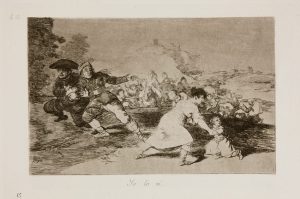 Many artists, however, became sceptical and took a stance against the idealisation of war, turning a critical eye to the lives of the individuals behind the history depicted. Instead of a nationalist celebration, they created works that questioned the point of war, showed first-hand accounts of the death and horror of the battlefield, and illuminated the terrors of the home-front. One of the earliest anti-war activist paintings, Peter Paul Rubens’ Consequences of War (1638-1639), represented the struggle of The Thirty Years War (1618-1648) in Europe and inspired artists like Francisco de Goya (1746-1828) and Käthe Kollwitz (1867-1945). And we cannot forget Pablo Picasso’s (1881-1973) Guernica (1937), one of the most iconic anti-war paintings of recent memory, illustrating the destruction of the Nazi bombing of Guernica, Spain.

Today, conflict artists continue this visual tradition of anti-war activism, but in a less abrasive way. The point is no longer to show people what war physically looks like, but to make you feel and understand the gravity of the impact it had on people. New Orleans visual artist Willie Birch creates art rooted in experience from his time as an activist during the Civil Rights Era. He recently contributed to a 2018 Smithsonian exhibit focusing on forgotten histories of New Orleans in light of its tricentennial. His featured artwork Waiting for a Serious Conversation about the History of New Orleans (2017) provoked an uncomfortable yet necessary confrontation with the city’s history of school segregation. In Birch’s words: “The more layers you can create in your art – without it becoming overly complex – that’s what gives your art the energy and the emotional aspect that you need to get your message across to the viewer.”[2] The absence of people in the work makes you feel like you are also waiting for the discussion to be picked up. That emotion pushes us to take pause and think….maybe it is us the artwork is waiting for. 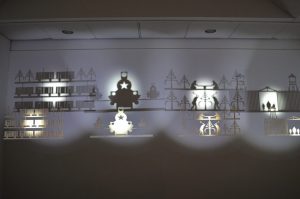 Similarly, Diana Forster creates gradual immersive experiences. She appropriates the Polish craft of wycinanki (cutting folded paper with sheep shears) to communicate her family history, as in Siberian Exile (2016). We would not guess by looking at these beautiful, trinket-like sculptures that a dark story looms around the corner, namely her family’s deportation to a Siberian labour camp at the beginning of WWII, a history generally overshadowed by the horrors of the Holocaust.[3] 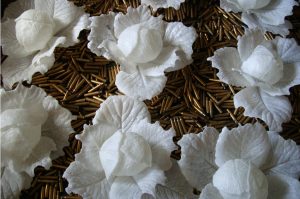 There are many versions of history, and many sides to every war effort. Though one thought seems unanimous amongst conflict artists today: senseless violence needs a ceasefire while forgotten histories need a voice. Artists from Kollwitz to Forster show us the personal effects of war and how conflict art can be used as a voice of protest, to speak up for forgotten histories and personal accounts that are omitted from our textbooks. These artworks fill gaps in our history and shed light on the darker sides of life’s ongoing conflicts.