John Hoggarth is co-director of The North Wall and directed Monica Dolan’s new play, The B*easts, which returns to Oxford this month following a critically-acclaimed run at the Edinburgh Fringe Festival & the Bush Theatre in London. This week, the show was nominated for an Olivier Award. Here, John talks about the process of bringing the show to life, from page to stage: 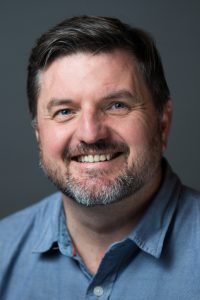 Bringing The B*easts full circle. It was almost a year ago that the BAFTA award-winning actress Monica Dolan did the very first public performance of her debut play The B*easts as part of the Alchymy festival at the North Wall. We are proud to be the only venue outside of London to be hosting the production following its sell-out run at The Bush Theatre.

I first met Monica when I was working as an actor and we were both in an epic production of Peter Pan – she was playing Wendy and I was one of the Lost-Boys, so I suppose we kind of met in Never Never Land. I remember her fierce intelligence and relentless curiosity. It makes Monica a brilliant actor and I also knew it would make her a formidable writer. Over the years Monica and I had had a few conversations about her doing some writing for the stage. She told me she felt writing was more of an intellectual thing – she said that acting was her way of being clever but not having to compete. But I knew she was irritated by never having sat down to write, despite wanting to do it for a long time.

Eventually she found a subject that intrigued her enough to try and explore in the form of a play. She told herself she would write this one for practice, it’s a bit more freeing to think like that. When I read one her early drafts the quality of the writing absolutely shone through and she had found a way of exposing the controversial subject matter without ever resorting to sensationalism. When Monica asked me to direct the show, I was thrilled to work with her as an actor and also excited to work with her as a writer in developing the script. 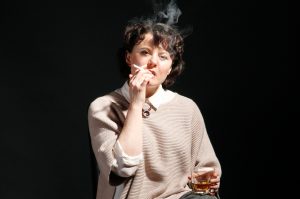 Monica Dolan in The B*easts

The B*easts has been described as a searing “What If?” study of the pornification of our culture and the sexualisation of our children. Setting the modern obsession with putting your own child first, against our responsibility as a society towards our children as a whole, this dark tale explores how far one mum will go to give her child what she wants.

We decided to put in front of audience at The North Wall as part of Alchymy, our new writing festival. It’s a crucial time for any new play when the audience gest to hear the play for the first time, and sitting in the studio alongside forty others I was convinced we were making something very special. Edinburgh was a stunning success and it has been great to have a run at The Bush – a theatre that has always championed new writing. But I am proudest of all to bring the production back to the North Wall.

The B*easts is on at The North Wall on Tuesday 13 March. Book tickets