Elaine Kazimierczuk was due to display a new exhibition of her colourful abstract landscapes, Fresh Work, here at The North Wall in May 2020 in celebration of Oxfordshire Art Weeks. Here, Elaine talks us through the places that inspired three of the works in the exhibition. 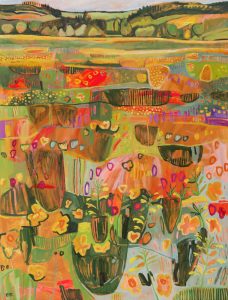 Last June, I made a special trip to Joan’s Hill Farm in the Wye Valley, Herefordshire, to see the stunning display of meadow flowers. It was simply glorious, field upon field of many species of wild flowers – lady’s bedstraw, cat’s-ear, yellow-rattle and common spotted orchids as well as greater butterfly orchids. Although the charity Plantlife now manages this large reserve of approximately 46 acres, it was farmed until recently in the traditional manner needed to allow the flowering and re-seeding of the flowers.

This piece is bold, bright and colourful. I began with an orange-ochre under painting, then added flashes of fluorescent orange, yellow and pink acrylic, before working on top with oil paints. I used linseed oil medium to create glazes in some areas, besides gels to create different textures for specific sections of the painting. The randomised effect is intentional, if that’s not a contradiction in terms – and in any case, it’s not possible for the human brain to generate a random thought. Even in a meadow such as this, the flowers are not distributed chaotically, but according to many factors such as sunlight, drainage, the presence of other species and so on. I try to keep open to the possibilities of paint to allow it to do its work. The paint has to take over, and the job of the artist is to let the paint speak and not get in its way.

Snake’s Head Fritillaries are Oxfordshire’s iconic flower. These delightful flowers look like little tables laid with pink and white gingham table cloths all ready for a miniature Mad Hatter’s tea party – (how very Oxford can you get?). If you visit Iffley Meadows, along the floodplains of the Thames, in late April to early May, you will see them massed in their thousands. BBOWT (Berkshire, Buckinghamshire and Oxfordshire Wildlife Trust) took over management of this reserve in 1983, when there were a mere 500 flowers. As a result of BBOWT’s careful management and controlled grazing, numbers have increased to over 89,000 – a huge success story.

Beginning with a red ground, I applied flashes of fluorescent acrylic paint and then finally worked in oils. The flowers in the foreground, though loosely painted are deliberately recognisable as fritillaries. In the background are pollarded willows growing in the drainage banks which are important to maintain the critical level of drainage for the site, as, although fritillaries like wet conditions, they cannot tolerate waterlogging over the winter months. I used thin areas of paint – I wanted that wistful effect, an other-worldliness, beautiful strange flowers as far as the eye can see – a sort of wonderland. 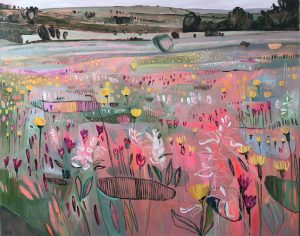 Cae Blaen-dyffryn is a single field reserve near Lampeter, Wales, managed by Plantlife Cymru. There are many rare and beautiful plants here, but I am especially enthralled by the butterfly orchids, which are present as both the greater and lesser species. Normally, I don’t try to depict the physiology of specific flowers, but here I’ve included stylized representations of these strange, delicate, showy orchids to create a sort of embroidery within the composition. It reminds me of medieval tapestries where schematic flowers were often worked into the meadow scenes. In the days before intensive farming and the systematic use of fertilisers, meadowland would have been strewn with flowers like these.

In this free interpretation of the orchid meadow at Cae Blaen-dyffryn, I’ve used a range of paints and pastels. There is a previous painting beneath the meadow work, which is just apparent in some areas. I like this effect. It’s a sort of palimpsest, and to me it’s the painterly equivalent of nature’s annual renewal. I added red and yellow ochre pigments to the primer, to create a pink base. Next I outlined the main shapes, drawing them in with oil bars and pastels. I like the scumbly texture they produce as they graze the canvas. I followed through with underpainting in fluorescent acrylics and finally worked over this with oil, mixed with various media. Bright marks break through. This creates the impression of a sunlit meadow brimming with wild flowers.

A proportion of the sale of these paintings will be donated to the charity managing the site.

Elaine Kazimierczuk’s Fresh Work exhibition will return to The North Wall in Spring 2021. Until then, view the online catalogue.