This week, as part of Oxfordshire Artweeks, artist Elaine Kazimierczuk was due to open an exhibition of wildflower landscape paintings in The North Wall gallery. During this period of lockdown, our connection to our outdoor surroundings seems more important than ever, as we seek solace in our gardens and parks. Here, we take a look at the grand tradition of painters who, like Elaine, bring the outside in: 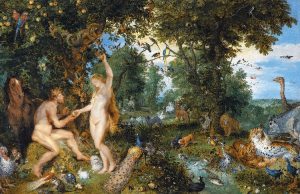 Jan Brueghel the Elder & Peter Paul Rubens, The Garden of Eden with the Fall of Man (c. 1615)

For centuries, gardens have been used as places of escape, exploration, and expression. Gardening was one of the first achievements of early civilisation. We can find paintings of gardens as far back as villas in Pompeii in the Garden-Room at the Villa of Livia (30-20 B.C.E.), which served as a refuge for Romans escaping the high summer temperatures of Italy. Whether painted inside or cultivated outside, gardens have been depicted as places of paradise. In the Medieval Age, the Virgin Mary was often shown in an enclosed garden, a symbol of her virtue, as in The Little Garden of Paradise (c. 1410-20) by Upper Rhenish Master. The motif was also shown as the biblical ‘heaven-on-earth’, as we see in The Garden of Eden with the Fall of Man (c. 1615) by Jan Brueghel the Elder and Peter Paul Rubens. Gardens were politically used by royals, such as King Louis XIV, to demonstrate their power and prestige. That is, until the rise of the middle class in the 19th century. Instead of the Gardens of Versailles, people earning a living could grow their own personal heaven right in their own back garden! This creative power also gave rise to the artist-gardner.

Beginning with the French Impressionists in the 19th century, artist-gardeners wanted to capture the inspirational and changing nature of their lovely gardens and, in some cases, escape reality. Claude Monet and Camille Pissarro, for instance, took refuge from the Franco-Prussian war in England in 1870. They found themselves inspired by Green Park and Hampton Court, among other English parks. Garden paintings are beautiful, but their true magic is in the fact that most of the gardens captured on canvas still exist today. We can open a window into moments in history by the gardens of those long gone as seen in The Gardens of Montacute (1893) by Ernest Arthur Rowe. 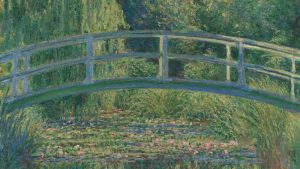 Gardens did not only serve as inspiration for the artist, but became artworks in their own right. For the artist and the resident, individual gardens were populated with style and trends. They introduced hybridised and exotic plants transported from abroad. Chrysanthemums, for instance, were only introduced in Europe in 1789 from China/Japan. Monet created his gardens everywhere he lived with an artist’s eye (most famously at Giverny), curating flowers like chrysanthemums, poppies, and dahlias together based on how their colors looked one next to the other. The garden was Monet’s outside studio, the ultimate Impressionist en plein air painting technique. In 1873, Pierre-Auguste Renoir (Monet’s friend and Impressionist colleague) painted him painting his garden in Claude Monet Painting in His Garden at Argenteuil. Like dollops of paint on the canvas, Monet used his flowers as colours on his canvas. 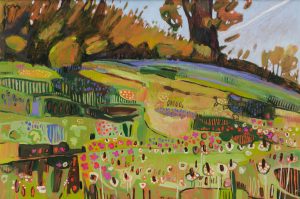 Artist-gardeners are those who can express all the magic and individuality of a garden. They capture the recognisable features of the flowers, paths, and air as a portrait painter would capture a smile, flash of the eyes, and stance of their subject. Artists today, such as Elaine Kazimierczuk, have built on this tradition to capture a garden’s enchantments and identity on canvas. More in the style of Henri Matisse than Claude Monet, Elaine’s work stems from working with intimately-known localities, usually in her native Nottinghamshire and increasingly around Oxford. Her style captures the poetic paradise-esque qualities of a garden, while celebrating the unique individuality yielded by the chaos of nature.

This article was informed by the documentary “Painting the Modern Garden: Monet to Matisse”, Royal Academy of Arts, based on the 2016 exhibition.