The first in a series of blogs taking artists’ work from our gallery online, Kimberly Glassman takes a look at how a traditional craft was transformed into contemporary art.

A wood engraver creates pictures by carving designs into a wooden surface, leaving the parts they want ‘printed’ at surface level and deepening the ‘non-printed’ sections. Though today we think of this print making process as an artistic medium, wood engraving was not always considered a creative practice. Along with its predecessor, woodcutting, wood engraving originated as a traditional craft. Very much the Instagram of its day, its main role was to disseminate visual material and culture. So how was it that wood engraving transformed from visual aid to the independent art form it is today? 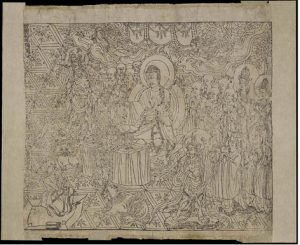 Though the first woodcut was made in China in 868 CE, [1] our story really begins centuries later in Europe. Around the 1400s, craftsmen started to make woodcuts to circulate images used for New Year’s greetings, mementos from religious festivals, lids of offertory boxes, decorations for calendars or almanacs, and as decorations in the inside of books. Book illustrations became standard after the advent of the printing press around 1440. [2] In these early years, woodcuts were mainly used to help explain or complement text. 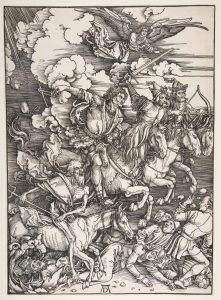 In the 1500s, artists Albrecht Dürer and Hans Holbein broadened the subject matter of woodcuts to include anything from religious to scientific content, whereas woodcuts of the 1600s were mainly reproductions of famous paintings. [3] This evolution continued to the point where, by the 1700s, many felt like woodcuts were not unique at all, that ‘the wood had effectually ceased to be the mouthpiece of its own messages.’ [4] Woodcutters wanted to find their own voice, but to do that they needed to become their own person.

Whereas today we think of the creator of the wood engraving as one person, the artist and woodcutter used to be two different people. The artist would create the design and then hand it off to his cutter to complete the ‘craft portion’. People grew upset with the division between ‘craft’ and ‘creative’. 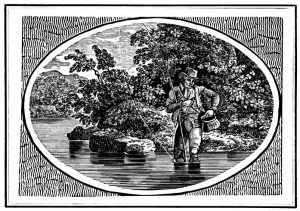 Thomas Bewick, The Angler and the Little Fish, wood engraving. From The Fables of Æsop, and Others , with designs on Wood by Thomas Bewick. London: Bernard Quaritch, 1885.

To give xylography ‘a new lease on life’ Thomas Bewick created a new engraving technique. [5] His technique allowed wood engravers to create more detailed work with thinner, delicate lines. By creating his own designs, he was considered the first to use the medium as an ‘original art.’ [6] In December 1898, ‘The first exhibition of original wood engraving’ was held at the Dutch Gallery on Brooke Street.

With a growing number of wood engravers expanding the creative potential of the medium, a society was created: The Society Of Wood Engravers, (SWE) founded in 1920. [7] Celebrating their Centenary in 2020, SWE celebrates wood engraving’s extraordinary evolution from visual aid and reproductive craft to original art form. We cannot wait to see where wood engravers will venture to next.

[1] Furst, Herbert, and Universiteitsbibliotheek Utrecht. The Modern Woodcut: A Study Of The Evolution Of The Craft (John Lane, The Bodley Head, 1924), p. 11.