Rebecca Welburn is The North Wall’s stage manager. She is currently at Edinburgh Fringe 2019 working on E8, for which she is also credited as Lighting Designer. We asked her about the Fringe experience so far and what her job there entails:

How does your role in the E8 production team differ to your day-to-day work at The North Wall?

For E8, I’m Co-Production Manager, Stage Manager and Lighting Designer. All three roles allow me to be very hands on with the production.

As PM/SM, I typically provide practical and organisational support to the overall company. Our flat in Edinburgh, which I’m sharing with actors Alice Vilanculo and Tina Chiang, has become E8 HQ! We meet here to do line-runs, notes, distribute flyers and posters to our wonderful street team, and generally check in with one another. It’s important for me as SM to make sure the company are OK and let them share any thoughts or concerns in a safe space.

Now that the show has opened, it’s my job to ensure every aspect of the production runs just as the director intended, time after time, until the month finishes. We only have a very short time to do our get-in, so each of us have our own jobs to do in order to get the show open on time. We’re quite an extraordinary team. I then take my place at the back of the auditorium at the tech position and follow on book during the performance, triggering sound cues and LX cues. When the performance ends, we pack it all down, return it to storage, ready to do it all over again the very next day.

Lighting E8 is a first for me as a designer. I’m used to designing in-house at The North Wall mainly for dance productions, music, comedy and abstract theatre. So to take on a naturalistic play with a minimalist festival rig itself has been a new challenge. 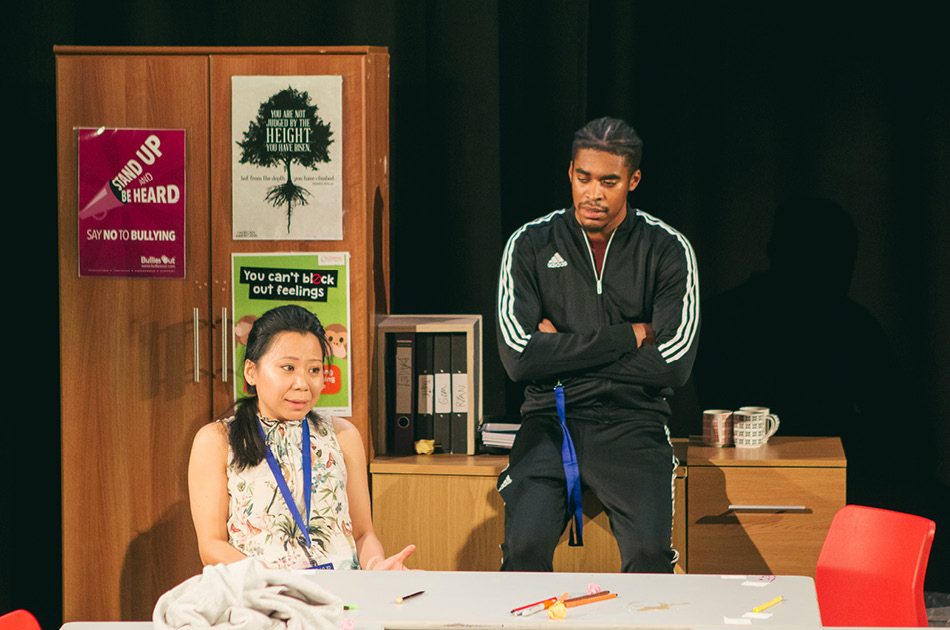 I meet so many different companies and artists that come through the doors at The North Wall on a weekly basis. As we are primarily a receiving house, I assist the companies from the moment they arrive through to the end of their stay with us, whether that be a day or a week. From unloading a van, set building, LX rigging and programming, fitting up surround speakers, I offer my skills any way I can to ensure they have a memorable visit to The North Wall. Working on E8 has taken me away from my usual day-to-day responsibilities, but it has allowed me to create and support a production from the very beginning and see it through to the end.

What’s been the most creatively-exciting thing for you about working on this production?

How can I pick just one? This is the first production The North Wall has taken to Edinburgh and to be a part of it with such a wonderful team and in association with The Pleasance, that itself is something I am immensely proud of. It’s been fantastic to see the play come to life and be part of the whole process from set sketches to blood testing (no spoilers!)

You’ve also worked as lighting designer for BOAR – has your approach been different?

Absolutely. I’ve never come across a performer like Lewis Doherty. The way he performs is slick, fast-paced and mesmerising to watch. It’s cinematic. So with that in mind I try and reflect his style of work and vision through the lighting, complimenting the narrative with atmospheric hues. 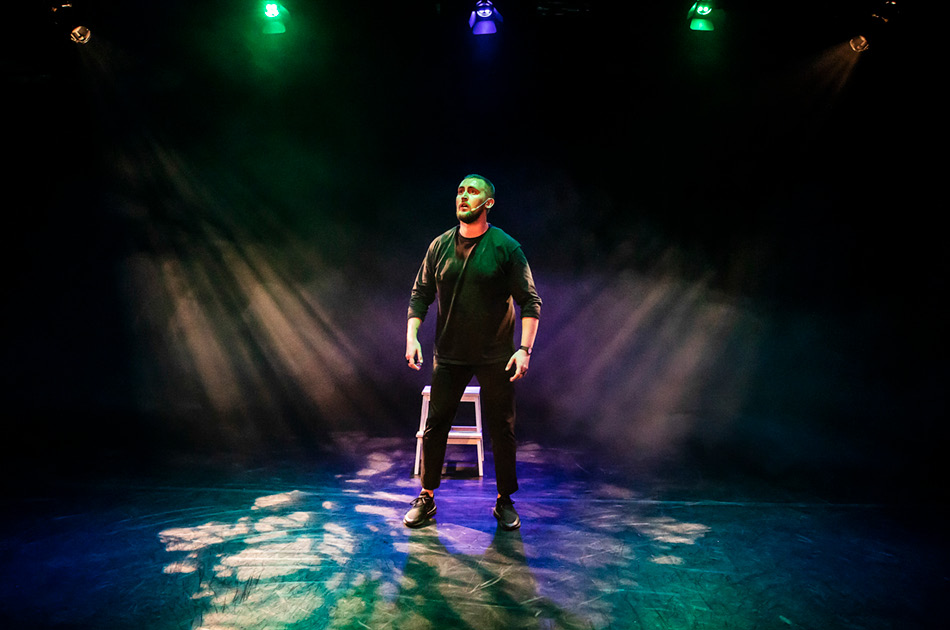 When Lewis first approached me to design BOAR, my mind went wild with ideas. But I knew we would need to scale it down for the festival rig I’d be using at Pleasance Below.

For BOAR, it all starts with finding the right colour palette that best identifies with it. Throughout the show, we are changing locations and mood constantly so the lighting needs to continuously shift with him. Some lighting changes are rapid and obvious, some are subtle. Each location has a layer to it, building more in depth as the scene unfolds before the audience. As a result of this there are a lot of cues in 60 minutes! Whether we are on a pirate ship during a storm or sat by a campfire, it’s great to creatively play around with a variety of colours, effects, textures and intensities. And haze…lot’s of haze.

It’s your first time at Edinburgh Fringe – what do you make of it so far?

Edinburgh is such a beast. I’ve visited this beautiful city before but never during the festival, let alone work it! The vibe around the city is something I’ve never experienced. Each day is undoubtedly hectic but in an awesome way. You’re never short of things to do. Whether that be see a show, meet some friends in the hustle and bustle of the Pleasance Courtyard or take a walk through the cobbled streets…which isn’t hard as they’re everywhere! It can, at first, be a little overwhelming, especially if you have no idea what to expect.

There’s not a blank space in the city that isn’t covered with posters and you can’t walk two minutes down the road without accepting flyers from someone. Seeing social media buzzing with recommendations for shows allows me to play each day by ear. Word-of-mouth recommendations play a huge part at the Fringe. I’ve seen shows that have made me cry, laugh, weird and wacky, made me reflect on my life. I can’t help but admire the performers and companies for putting their absolute everything into it and leave feeling inspired. It’s really beautiful to see all these artists and people drawn to one place doing what they love to do.

Top Tip: Prioritise & learn how to escape the madness – occasionally, it’s nice to have some down time.

Why should people come and see E8?

E8 represents the lost voices of the pupils who have fallen through the cracks of mainstream education. It’s a representation of a system that is normally hidden away. Anyone with an interest in social justice, or writing that speaks truth, E8 is an absolute must-see. It’s heartfelt, comical, honest and a story that simply needs telling.

BOAR will be touring to The North Wall on 2 November. Find out more.