Ben Duke is the Artistic Director of the Olivier Award nominated Lost Dog Dance. Previously seen at The North Wall with his critically-acclaimed one-man show Paradise Lost (lies unopened beside me), Ben Duke returns to Oxford from 1 – 2 November with his latest dance-theatre production, Juliet and Romeo.

Is this the story of what might have happened had Romeo and Juliet lived?

Yes.  When I watch Romeo and Juliet I am always hoping that their timings will be a little different and Juliet will wake up a few moments earlier.  I know she never will but I can’t help hoping for it.  The idea for this piece came from allowing myself to imagine that alternate version. In this work they’ve been together about 25 years.

Are they happy and how do they feel about each other?

At the point that this piece is set they are in something of a marital crisis.  Basically they love each other and sometimes they wish the other one were dead.  The bloom of teenage romance has faded but it haunts them.

What inspired you to make it?

Had you seen stage/film versions of the original before you made your piece?

I have seen several versions.  Baz Lurhman’s film version came out at a time when I was particularly impressionable and is lodged in my memory.

How do your versions of the characters differ from Shakespeare’s?

Romeo is in the middle of a mid life crisis and so his character is trying to re-shape itself.  He is trying to let go of the passionate, over the top teenager he was and become a Man.  But he doesn’t have any clear idea what that Man should look like so he is in limbo.  Juliet is very attached to the extraordinary teenager she was and is finding the ordinariness of her current life a struggle.

At times – if you had them round for dinner you would probably find them a little self obsessed. 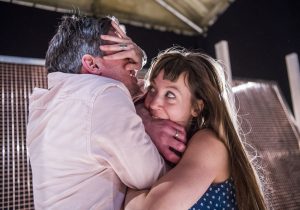 Tell us about casting and working with Solène Weinachter, who plays Juliet:

Solene is someone I first worked with when I made a piece called “the life and times of girl a” on Scottish Dance Theatre in 2010.  She is a brilliant performer and someone I knew would be willing to spend time in the painful and ridiculous process that we went through.

And what do you hope audiences will take away with them after seeing the work?

A sense of realistic optimism about the state of their relationships – past, present or future.