The ArtsLab ensemble are well into rehearsals for Nathan Ellis’ The Disintegration Loops. We hear about the second day in the studio from assistant director, Grace Joseph:

The director informed the group that today would be spent discovering and discussing the soundscape and the structure of the play. Casting was confirmed as the initial, fortuitously apt casting from the read-through yesterday. We had a preliminary discussion regarding potential cuts and came to conclusion that we would attempt to include each of Iff’s meetings with the various characters in Act 1, whilst shortening and focussing on their brevity and pace. We will look at representing Act 2 in a more physical, less text-based mode, without losing the sense that it does not take place in a surreal space, and whilst considering the torture of the politician as the moment Iff finally takes real action and commits actual, external violence. 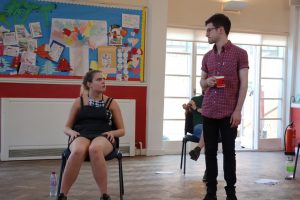 Our discoveries in terms of the soundscape of the play began with music seeming to be related to Iff’s psychological state, and her clarity or confusion. There appear to be moments when, in Iqbal’s words, there’s a virus in the system. Moments judder and shift, and characters’ voices and language slides. This will extend to the sound design, and the way in which tracks will be distorted and stutter. Our sound designer, Tom, newly on board the project, will also be collaborating with us to create a soundscape to signify the different setting of each scene. Actions and stage business with props will, for the most part if not always, will be incorporated into this soundscape, rather than using real objects. We attempted to express what might be meant by the phrase ‘anarchy music’, and concluded that it can denote music that is uncomfortable, disorientating, and somehow primitive and atavistic in its rhythm.

Before we broke for lunch, Iqbal shared some very useful insights on actioning for actors, suggesting that often we do not have clear actions in the present, and it’s only in retrospect that we find or impose clarity. Confusion in actions is accordingly very valuable. 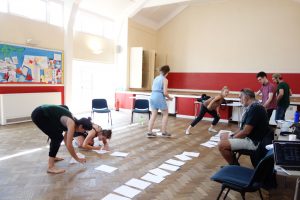 The afternoon’s work included some discussion of the divine and mythic. Iqbal articulated the way in which the belief that there is something of the divine in you and being dispossessed can easily lead to fanatical thinking, and that the apparent awareness of our lack of inclusion is a seductive, heroic, and Romantic rhetoric. We did some preliminary research on the intertextual mythology introduced by the character names (Pythia, etc.). Having listened to the end of Mahler’s Second Symphony, we also observed and discussed the appeal of arriving at a state of grace, and the seductiveness and danger of the music.

Iqbal ended today’s rehearsal with a request that the actors work out which sections might benefit from being learnt and delivered off book, and asked Lewis and Izzy to read over and get a good sense of the dynamics of Act 2, so that we can begin to work out a succinct version through improvisatory activities. 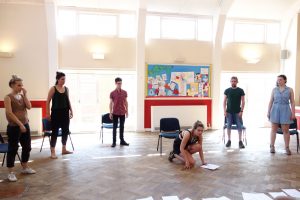