We’re into the third and final week of our second ArtsLab residency this summer, Bluebeard’s Castle, with OperaUpClose. We spoke to the design team, led by Kate Lane alongside two young designers Cecilia Trono and Ellie Jones, about how they’ve created the design concepts, built set and scenery and sourced costumes for the project. 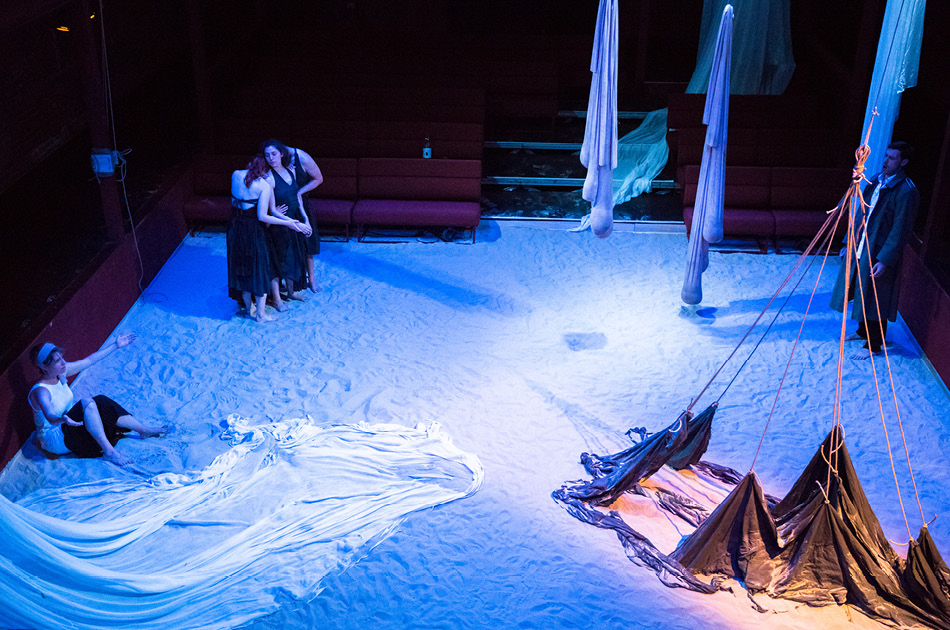 Who or what gave you the most inspiration for the design?

The concept for the design really evolved by examining the uncanny and in particular its use in horror films. We took inspiration from early horror films such as Nosferatu looking at the idea of things lurking in the corner of your eyes.

How do you go from taking an idea and making it a fully staged production?

This project is a research & development project without a public showing and therefore the design process is very different to if we were staging it for a performance run. Normally we would start months before the rehearsal starts with conversations with the Director and Choreographer, and with visual research and several model boxes before we decide on a final design. Here we are really just exploring ideas and experimenting with how design can influence the direction in some way. There is a lot more experimentation.

Did you do anything very different design wise as it is an opera?

We haven’t done anything different design wise because it’s an opera other than making sure the conductor can be seen my the instrumentalists and singers. With the dancers it is slightly different as how they manipulate the staging is being developed alongside the design. This involves lots of discussions with the creative team and quickly trying out ideas in the studio. Having the theatre is a real treat and in some ways I am using it as a model box.

Why did you decide to do it in traverse? [with the stage in the centre and audience sat on either side]

We decided to do it in traverse as we need the imagined audience to be totally involved and absorbed in the space, in order to draw them into the belly of the beast. There would be an added physicality for the audience themselves: they would have to walk across the stage to go and sit down, making them integrated into the set. They’re swamped by the design.

Can you tell us more about design ideas for costumes?

Costumes are a work in progress and at the moment we have mainly been working on the dancers’ costumes. To design these we have been keeping in line with our main idea which is the ever-evolving living beast of the castle.

Any ideas you really wanted to do but had to forget about?

[Kate] I always design something for the space and budget that we are given but I also secretly design the show in my head with limitless budget and time! So therefore the same ideas but bigger/ more complex and more mesmerising!

OperaUpClose are working on Bluebeard’s Castle as part of a three-week ArtsLab residency with an ensemble of emerging singers, dancers & designers. To find out more about ArtsLab at The North Wall, click here.