The fourth in a series of interviews with the cast and creative team of Fast Track.

Alex Berry recently graduated from the Bristol Old Vic Theatre Design MA course. She is an alumnus of the North Wall Summer Outreach (2011) and has since designed several shows for us, including 2012’s Dead on her Feet. Future projects include Song of Riots (Awake Projects / North Wall), and Ilana Turner’s O Rejane at The Bootleg Theatre, Los Angeles in November 2014. We asked her about the inspiration behind her design for Fast Track:

“Parks are funny places. They are everyone’s and no-one’s: a space without rules, almost. A park on a weekday afternoon, when most of the polite working world is off working, is a place where anything can happen. 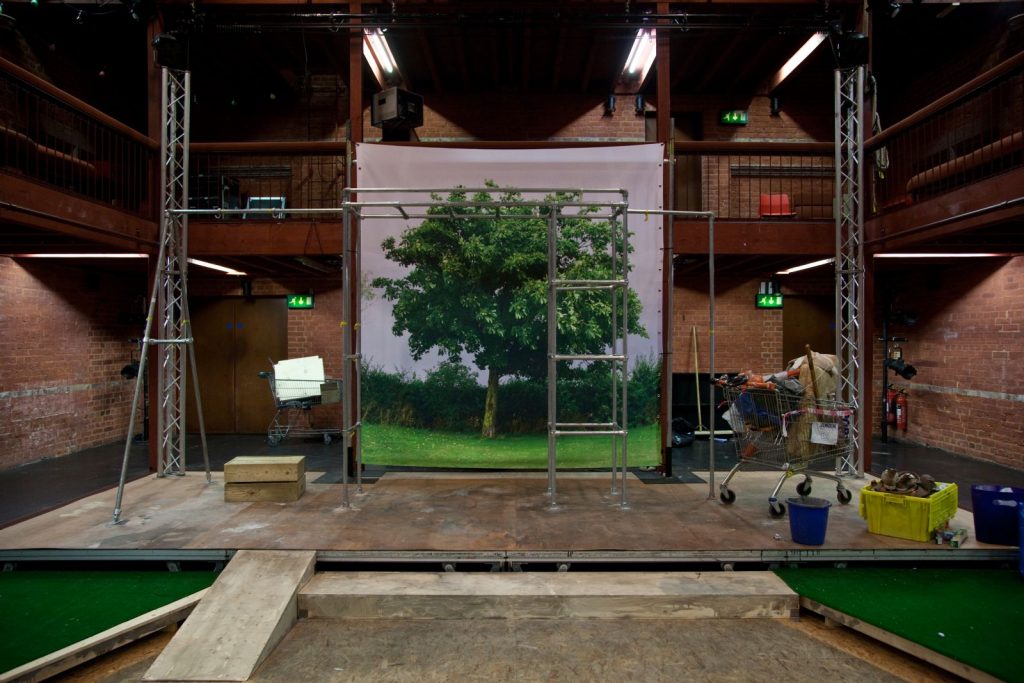 There is a disarming ordinariness to the characters when we first meet them and we wanted to create a space which complemented this feel of the humdrum and the everyday, whilst also allowing for the possibility of the absurd and extreme. I was inspired initially by the lost quality of the characters and by our relationship to strangers in a park as faceless beings, bodies that take up space. We were drawn to the work of Melinda Gibson who creates surreal collage pieces in which a human silhouette appears to be a window into another place and time, and also collected a lot of images of people dissolving into their environment.

We wanted to recreate the park landscape and make a physical space which was exciting to move around in and gave the actors the opportunity to run, cycle and play. We knew that at the heart of this park was the playground, it is a safe place – where children come to be fearless and where teenagers gravitate back to when experimenting with all the things that growing up offers them. What we arrived at is a park which has basically been boiled down to its essential parts and then split up. It has a staged quality to it which allowed us to introduce the mechanics of the theatre without apology: wires hang loose, the steel deck is seen. The band were a big deciding factor in this too, we wanted them to feel as if they had set up for a gig, cables everywhere, festoons at the ready.

Cat’s work is very image based and she dreams up the most surprising and bizarre images which are a dream for a designer. Some of these images presented a big challenge for us and one, which we’ve been talking about since the first research and development phase in 2013, is the ‘Invisible Man’. We looked at the work of Liu Bolin, an incredible artist who is famed for painting elaborate suits which allow him to dissolve into the background. ‘A painted suit’ we thought, ‘can we really?’ It turns out we can, and we’re very excited about the invisible man and can’t wait for people to meet him!”