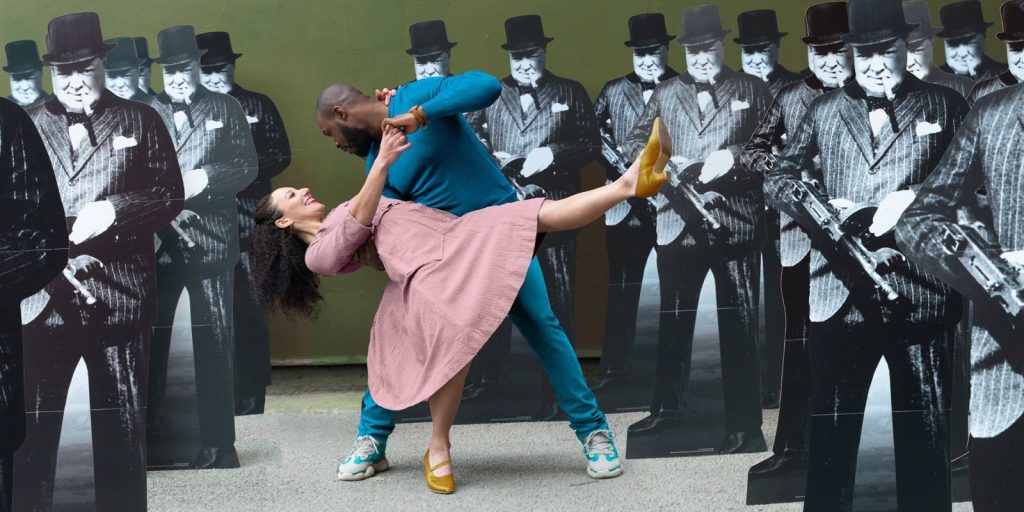 ★ ONLY SHOWS OUTSIDE LONDON ★

‘No-one else makes theatre quite like this’ (★★★★★ Time Out); The Winston Machine is both a profound family saga and an epic, unmissable state-of-the-nation show.

Keep calm. Carry on. Blitz it out. Dig for history.

At the height of the Blitz, Charlotte is in a passionate affair with a Spitfire pilot, fighting fascism in red lipstick and living each day like her last. Eighty years later, her granddaughter Becky is stuck in her hometown, cooking dinners for her dad and singing old songs at other people’s weddings, dreaming of a better time.

The 1940s are more real to Becky than her life – but when a friend moves back to town, she’s forced to face the present. What happens when there’s no war left to fight?

An epic, intimate family saga, The Winston Machine is an unmissable new state-of-the-nation show that asks how we live with what we inherit.

‘A dance across the decades… a typically probing and playful work, shot through with music and mischief. Directed with head-rushing freedom by James Yeatman and with deft dramaturgy from Lauren Mooney.’ ★★★★ The Guardian (on The Winston Machine)

‘Unmissable. An exceptional, innovative examination of the idea of Remembrance. With an outstanding cast and impressive score, this is a challenging and engaging triumph.’ ★★★★★ Everything Theatre

The company has toured internationally, including an acclaimed run at Berlin’s renowned Schaubühne Theatre and a commission from Vienna’s Schauspielhaus. Shows have won the Sunday Times Playwriting Award, Peter Brook Festival Award and OffWestEnd Best Ensemble.

Director James Yeatman is an Associate Director of Complicité.

Please note: the matinee and evening performances originally scheduled for Saturday 26 February 2022 (2pm, 7.30pm) have been cancelled due to unforeseen circumstances not related to illness. We apologise for any inconvenience caused.

Members of the Box Office team will contact all ticket holders, who may transfer to a performance on either Thursday 24 February or Friday 25 February, or request a credit voucher or refund.